In the blog on this page you can find in irregular sequences informations, pictures and dates about our current projects.

At the exhibition > as above so below< from June 17 - 26, in the Studio Rose in Schondorf, six new picture panels were created in addition to a large number of new work on the subject ‘point’, dealing with the swarm. This will certainly be followed by further works, but it is a content that is in many facets related to proceedings of our time. The very inspiring collaboration with ceramic artist Karin Palme will continue in other joint exhibitions, for example on 23rd September on the occasion of the nationwide event  > JACKPOT 24 h <  of the German Culture and Creative Economy, also in our studio. 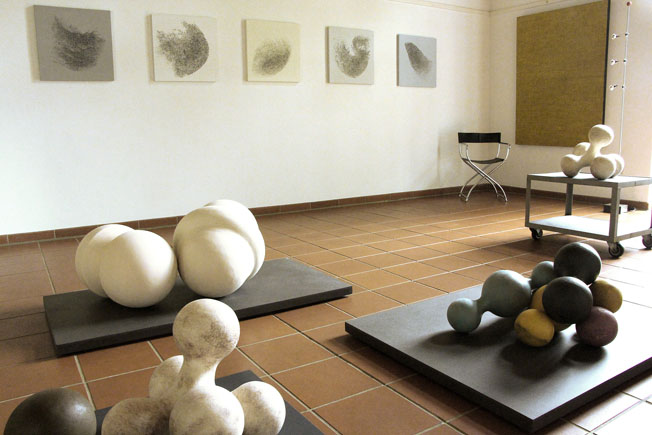 An initiative of the German Cultural and Creative Economy
www.kreativ-jackpot.de
www.karin-palme.de

The performance > moving echoes IV < in two parts in the Moritzkirche with Limpe Fuchs on June 4, on the occasion of the long night of art (> nacht der heimat <) in Augsburg, was a great success with more than two hundred visitors. High praise for it we got also by Dr. Martin Schawe, head of the State Gallery of Pinakotheken.
The second part of the work – also a semicircle for all those who already have a home, a semicircle for all who want to find home - was then shown a whole week separately in the two side-ships and then to be joined at a final church service in the choir room.

Under the figure of the Christ Salvator (created by Georg Petel in 1633), this was a good image of unity. Joseph Beuys once said of the Christ event: "I fought against it as if it were only a historical figure (...) as if one were to behave morally. In my opinion it’s about the realness of this power, a continually present, an intensifying present. It is not only a matter of a historical event, but of a real event. " 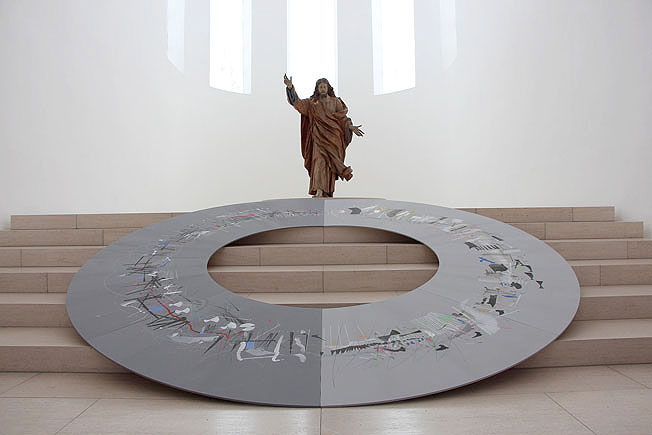 From the city of Augsburg and curator Michael Grau, we were invited together with Limpe Fuchs to >Lange Kunstnacht 2016< in the Moritzkirche. In this breathtakingly spiritual place (pictured left), created by the London architect John Pawson in one of the oldest churches of Augsburg, we will realise the performance > moving echoes < on the evening of June 4 in two 30-minute divisions. As in 2013 in Traunstein (pictured right) the painting surface - this time circular - is on the ground. The special acoustics of the church room as well as the church benches arranged around the painting surface, promise a special acoustical-visual experience.

14 days later, an exhibition will be held in a place that was once before the site of our artistic activities three years ago. This time, together with the ceramist Karin Palme, whose wonderful and quiet work leading in other worlds, we exhibit at Studio Rose in Schondorf.
> as above so below< is the common title of the exhibition - new rhythms and new colors on wooden bodies on the wall, ceramics in space.

The last few years were so filled with breathless activities that it is time to breathe again. In the silence lies the force. New ideas arise as well as other rhythms. 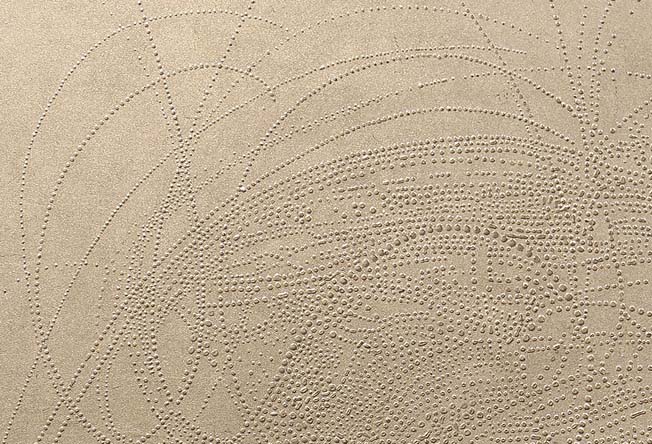 A new cooperation partner and inspired guardian about the strictness of the form, noticed in facing the new picture work - platinum gold on tar paper - on his first studio visit: if you do not yet know our pictures in their entirety, you do not know by this work whether it is decorating art or the consequent further development of a very specific art form.

Nice, if at first sight we still look irritating. We take this as a compliment and keep it with Friedrich Nietzsche: "We have the art so that we do not perish on the truth." 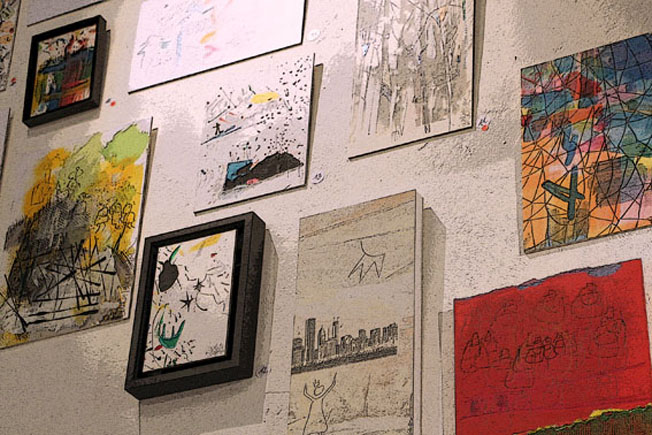 The announced "localization" in our open studio days finally resulted in the exhibition title "Without rules". During the artistic work with the Syrian refugees, the works that has been done have arisen completely independent of the previous context, without limitation in form, content and material, which we presented together with the work results of the workshop participants at the end of November on a well-attended afternoon. 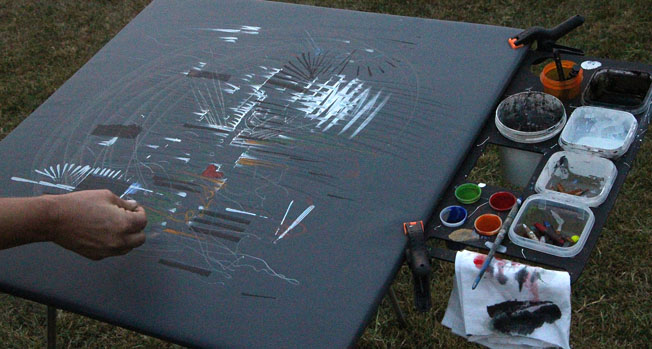 In September 2015 the stated aim of the third art visit of Jusha and Sven Mueller was Tirana, capital of Albania. The very specific sounds in the well of skanderbej square, virtualised by the headset, were predominant for two canvases – one painted at daylight and the other at dawn – while the cacophony of the roaring and honking cars around conducted the brushes and pencils of the painter.

Downtown Tirana, between the poles of western culture with its sparkling winners and the one who are in the daily struggel of survival, the public space still belongs to the people – with all its advantages and disatvantages. High heels, glass-walled buildings, old and crumbling architekture, street noise and all their masters of survival in the streets are forming the background for a fierce soundscape and vibrant life: raw, noisy but with an imposing grandeur.

Albania, corrupt and polarizing is on the other hand considered to be exemplary for the peaceful coexistence between Christians, Orthodox and Muslims. And the Head of State, Edi Rama, who is mayor of Tirana at the same time is a famous artist as well. 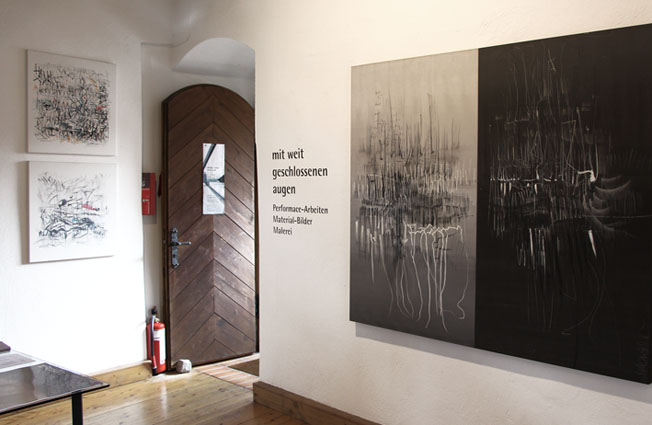 Invited by the the city of Isny and assisted by Kulturforum Isny e.V. in july and august 2015 the exhibition >mit weit geschlossenen augen< was shown in the Espantor Museum. In two of the four floors several performance works from Tokyo, Dubai, NY and LA were exhibited together with two paintings taken during streetperformances at different locations in the city of Isny.

The titel of the exhibition refers to >Eyes wide shut<, the last film by Stanley Kubrik, focussing the question between reality and fiction. This subject is also reflected in the streetworks, a kind of 'seismographic' paintings arise of the chaotic sounds in the streets.

On the occasion of the 'Museum's Night' – with a real run to the exhibition – another two performance-paintings were taken in front of the tower, being sold now for the benefit of an relief organization for refugees in our hometown. 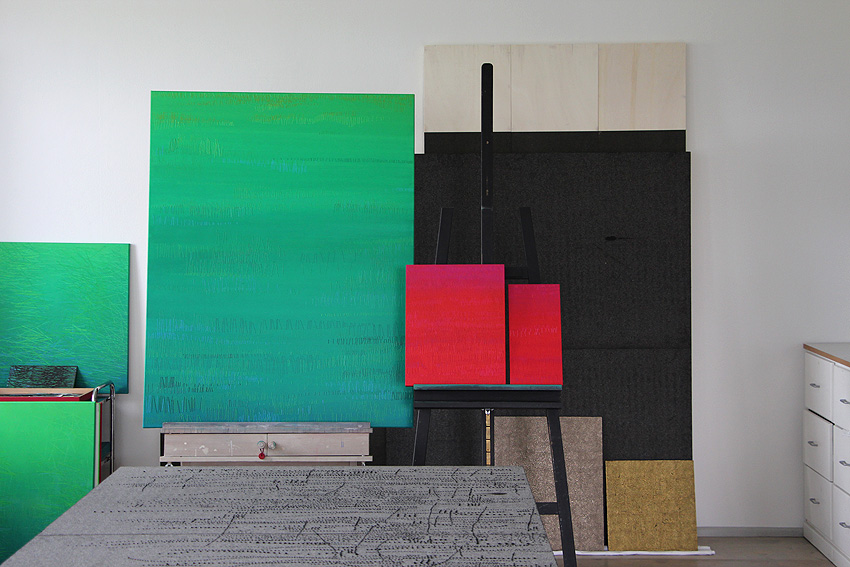 In May and June in the studio arise new color works als well as new works with goldleafs on tarpaper, partially carried out on large wooden bodies for the munich exhibition.

April 12 - November 1, 2015
> Opening: Sunday, April 12, 18 pm
Alpenhof Murnau
(Curator: Fritz-Winter-Gallery Diessen)
Ramsachstrasse 8
82418 Murnau
www.alpenhof-murnau.com
> from July 17-19, we are guests in
Alpenhof and gladly invite you to
visite us at our exhibition

In March 2015 Sven Mueller took over the artistic direction on the renovation of a 350 sqm floor square in a historical and listed building. These future business premises should be changed in a notary's office and ready for occupation on first July 2015.

At last a wallinstallation, composed of 46 pictures on wooden panels, is integrated to the representative areas, as a cooperative artwork of Jusha and Sven Mueller. Based on historical and handwritten document folders, maps and field maps, found in the notarial archives, the motives are photographed and digitally alienated and printed on canvas by Sven Mueller. Afterwords the panels are painted over with China ink by Jusha Mueller.

The second art trip this year led Jusha and Sven Mueller to Dubai. During the Artfair Dubai they showed some of their color works on canvas in Park Place Tower at Sheik Zayed Road.

During her street performances Jusha Mueller wears a headset that was developed in the studio. The tight earpieces of the headset first absorbs ambient sounds. It then amplifies and replays these sounds via dummy-head microphones and voice recorders so the artist can act in her own virtual sonic space and go into resonance with it.

High above the city on the rooftop of one of the Park Place Towers, at the quay between shipping goods at the old harbor Dubai Creek and in the red sand dunes of the desert with the melodies of the wind and the buzzing of the sand some canvases were created in that way. 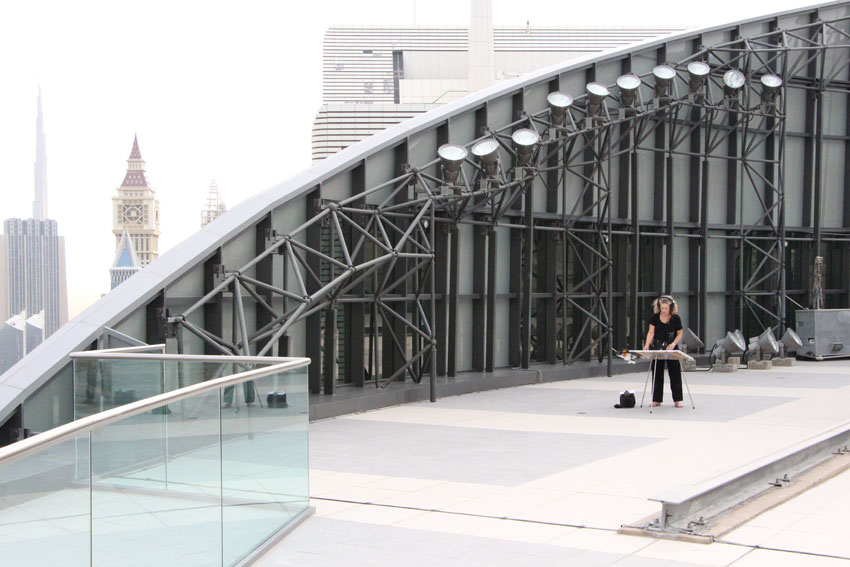 With the general renovation of our studio in the former schoolhouse we now saved a lot of space to realize bigger works. 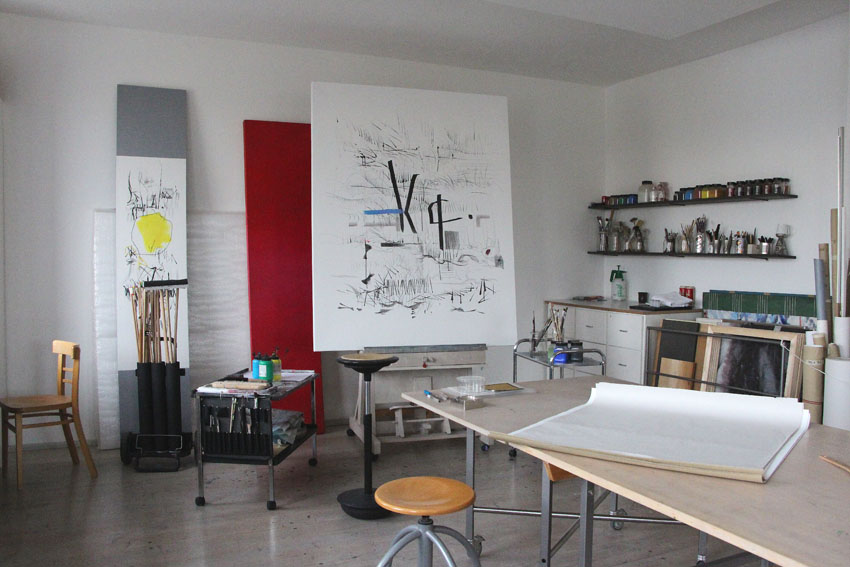 The first picture we made (gold leaf on tarpaper) was also the biggest one of our work group >tuned gold<. Just one week later it was sold on the art fair Karlsruhe by the Galerie im Fritz-Winter-Atelier.

The first performance trip in 2015 led Jusha Mueller to Tokyo. During the annually temple weeks in january she performed among others in Tokyos oldest Buddhist temple in Taitõ, responding with brushes, oil chalks and ink to the sounds of the crowd. 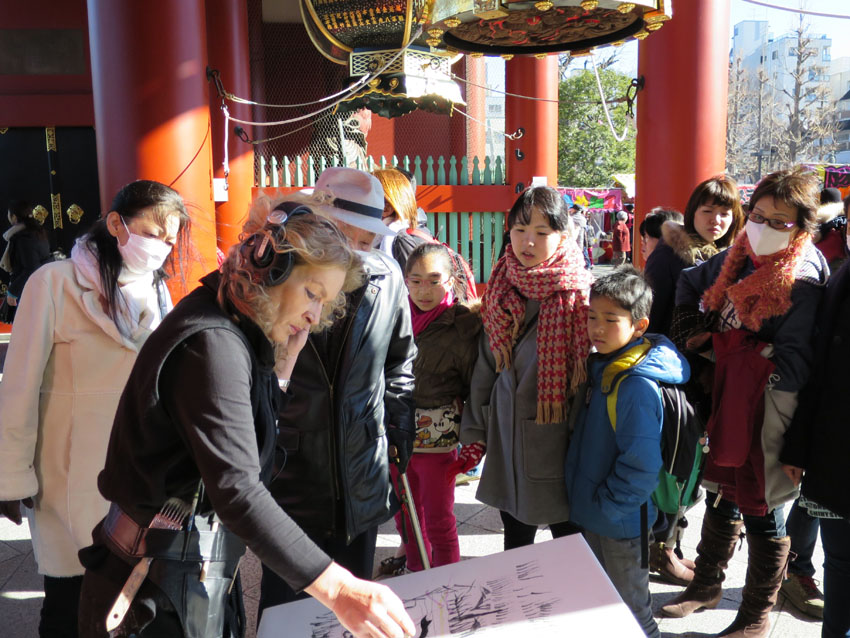